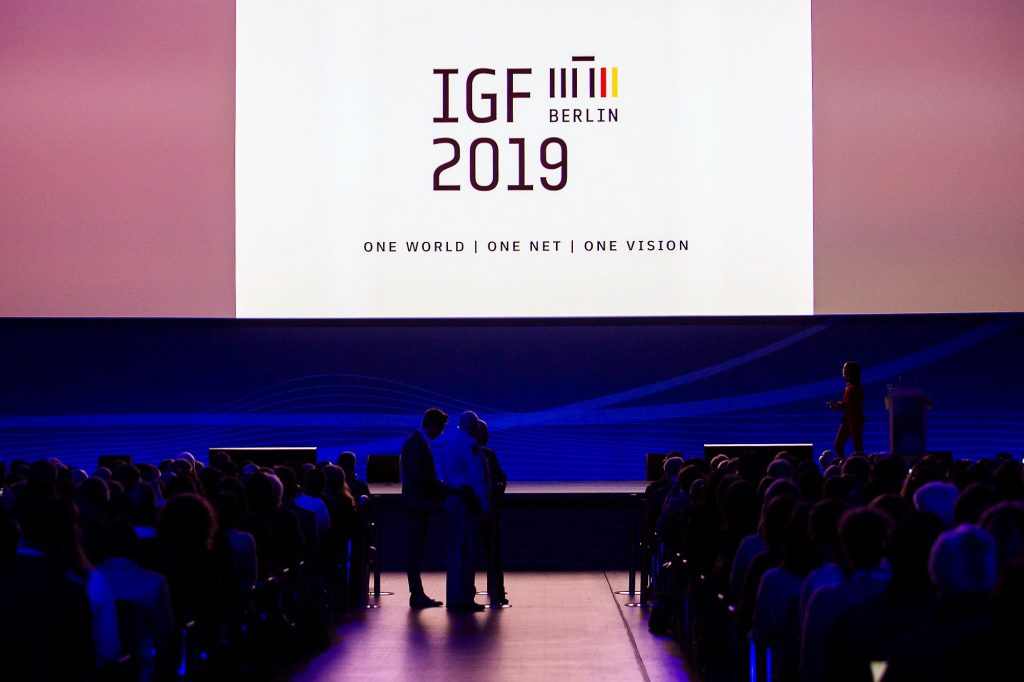 The fourteenth annual meeting of the United Nations Internet Governance Forum ( UN IGF) was for the first time hosted by the Government of Germany in Berlin from 25th – 29th November 2019.

This year’s weeklong event was themed: “One World. One Net. One Vision.” and included several workshops, open forums, dynamic coalition meetings, amongst other activities, that gave the many participants in attendance and those with remote participation an opportunity to engage in public discussions on several topics related to Internet governance and digital policy issues. “Internet Governance Forum (IGF) is a multi-stakeholder body convoked by the UN Secretary-General in 2006”. Since its inception, Internet Governance has become a crucial issue in world politics and discussed at the highest levels of diplomacy. Multi-stakeholderism – a model inspired by the then UN Secretary Dr. Kofi Annan, was recognized at the World Summit on the Information Society (WSIS), as the global model for Internet governance, and WSIS outcome document (2005) provided a framework and a set of principles for the model.

The opening ceremony of this year’s event saw Antonio Guterres, UN Secretary-General, and the host, Dr. Angela Merkel, Chancellor of the Federal Republic of Germany, make keynote addresses. Guterres likened the digital technology to Gutenburg’s introduction of the printing press to Europe in 1439. Both, he said, had democratized knowledge, but at different speeds. While it had taken more than five centuries to reach half the world’s population, Antonio pointed out that it had taken only 25 years to reach half the globe. He, however, decried the absence of technical expertise among policymakers, even in developed countries. Guterres added that digital invention was outpacing policymaking. Although half the world population is connected to the Internet, the gender gap in connectivity, he said, continued to widen. Globally, there are 327 million fewer women than men, owned a Smartphone, and could access the mobile Internet. Antonio reiterated that connecting the world’s people by 2030 had to be made a shared priority, not only for the UN Sustainable Development Goals (SDGs) but for gender equality too. In his closing remarks, Guterres revealed that he would soon appoint a Technology Envoy to work with governments, industry, and civil society. The Technology Envoy will help advance international frameworks, and nurture a shared digital future that puts people first, and helps bridge the social divide. These, he felt, were ideas that could be building blocks towards a shared digital future that can be proudly passed down to future generations.

On her part, Angela Merkel drew a historic comparison regarding the concept of Internet freedom. Thirty years ago, she said, the people in the Germany Democratic Republic demanded their right to freedom. The same values, Merkel added, were behind the visions of the creators of the Internet fifty years ago, and the World Wide Web (www) thirty years ago. Angela opposed acts of autocratic states to impose political and ideological restrictions on the Internet and called for the need to shape digitization in the quest to benefit every individual. She emphasized that digital sovereignty must be a fundamental human right. Merkel argued that multilateralism alone was not capable of stopping or preventing trends of restrictions.

Launch of the Contract for the Web

The launch of the Contract for the Web by its founder Sir Tim Berners-Lee was one of the key highlights of the event. This initiative is a product of the work of over 80 people for more than a year drawn from government, businesses, and members of the public. In his address to participants, Berners reiterated that Contract for the Web was a global plan of action that aims to protect the Web from political manipulation, fake news, privacy violations, and other malign forces threatening the Internet. The contract gives a roadmap – embodied in 76 clauses, and it outlines nine essential principles, three each directed at respective Internet stakeholders i.e., governments, companies, and individuals. This non-binding commitment tasks the respective stakeholders in protecting the Web from abuse and ensuring it benefits humanity.

For governments, the contract requires them to ensure all their citizens can connect to the Internet all of the time. The contract lays it clear that no one should be denied their right to full access to the Web.

For companies, the Contracts calls on them to ensure that connectivity is affordable and accessible to everyone and to respect the rights and freedoms of people online.

For people, it deliberates that they must be in control of their lives online, and most importantly, they must be empowered with clear and meaningful choices around their data and privacy. Additionally, people are tasked with the responsibility as web users to create the Web they want, as well as build healthy communities that respect civil discourse and human dignity.

At the time of the launch, the plan was said to have the backing of over 160 organizations among them – Facebook, Google, Twitter, Electronic Frontier Foundation (EFF), DuckDuckGo, CIPESA, and governments of Germany, Ghana, amongst others.

Several sessions centered their discussions around the themes of inclusion, access, accessibility, affordability, and the DNS ecosystem. Across the sessions, there was a common view that Internet use was on the rise, with about four billion users connected globally. Despite this development, there, however, still existed a significant number of users who desired to connect but were unconnected. Some of the reasons for the lack of connectivity were uniform in all the sessions for instance;- high costs of Internet, economies of scale, lack of infrastructure especially in the rural communities, lack of user friendly devices for persons with disabilities, lack of local content, and last but not least, digital literacy skills.

One notable session– “Electricity, Community Networks, and Digital Inclusion: The case of The Underserved Communities,” sought to discuss how communities affected by a lack of connectivity, content, or affordability, team up to overcome these gaps.

Dr. Carlos Rey Moreno, Association for Progressive Communication-APC, argued that the primary support the governments can accord community networks was through recognition. This recognition should be reflected in local policies and regulations that uphold the role of communities in addressing the digital divide gap, and even some of the issues the big corporations might not be able to address. He further noted that more stakeholders are now, especially from the government, are now closely following-up to learn more about community networks. “In the recent fourth summit on community networks in Africa that held at the University of Dodoma, Tanzania attracted people from Universal Service Access Funds from Uganda, Tanzania, and Ghana as well as ministry representatives from Cameroon and Liberia” said Dr. Carlos

On a different session on “Internet Accessibility Empowering Persons with Disabilities (PwDs),” it was cited that 15% of the world population lives with some form of disability, a figure representing more than one billion people globally. 80% of these PwDs were said to be living in the Global south. The marginalization of this constituency of persons with special needs, called for the requirement to have technology and software developers incorporate inclusive accessibility into their products from the onset of their development. This deliberate move would ensure the aspect of inclusivity for all without leaving anyone behind was attained.

Local content was also hailed as a universal message that was appealing to the global audience. It is emphasized that it could act as an incentive to have people to connect online, considering 17 million people globally have no reason at all to connect online, owing to the Internet could mainly be in a language they do not understand.

Nicola Bidwell, Professor in Human-Computer Interaction (HCI), University of Namibia, however, approached this view with caution, warning that producing and sharing a lot of local content in the digital space could result to it being harvested and analyzed by algorithms. Bidwell was of the view that community property rights should be developed to ensure adequate protection of content created.

On the other hand, Josephine Miliza, Africa Regional Coordinator for APC Community Networks Project, shared her experience on factors leading to a significant gender digital divide. Some of these factors are: gender wage gap, unaffordability for devices as well as data bundles, isolation, and most of the computer center or Internet cafe are male-dominated, household duties for women, to mention a few.

Dr. Sarbani Banerjee Belur from Gram Marg Rural Broadband Initiatives from the Indian Institute of Technology (IIT) Bombay, Mumbai, India, shared her experience in working with rural India to bridge the digital divide. Among other responsibilities, Dr. Sarbani works to increase digital outreach to remote and rural areas of India and also to advocate for meaningful usage of the Internet for women. She has also participated in validating an economic sustainability model developed to achieve sustainable community-based networks in India (i.e., Public-Private-Panchayat Partnership Model, 4-P).

In the session titled, ICANN-DNS: Threat and Opportunities, panelists and participants shared their views on the role of the health DNS ecosystem and what attention could be given out by various stakeholders including ICANN.

Barrack Otieno from Kenya Internet Governance Forum called for the DNS ecosystem that empowers Internet end-users i.e., registrant, to give them a role to decide on the Internet they want as seen by registrar and registry stakeholders.

Abdulkarim Ayopo from Nigeria also called upon more attention from ICANN to the African Region. The support requested may range from adding more staff to ICANN from Africa Region and also finding the best option for ICANN to support Africa even beyond its remits primarily to address the current digital divide. Dr. Abdulkarim further pointed out that within the ICANN multi-stakeholder model, some communities have more powers than others.

In responding to all of the raised issues, Göran Marby, ICANN President & CEO, pointed out that since he joined the office, Africa has been in his priorities. He further pointed out that Africa has hosted three ICANN meetings since he joined ICANN, two meetings at Marrakesh, and one in South Africa. However, Göran mentioned that access is not within the current ICANN mandate.

The 2019 IGF closing ceremony was graced by Ms. Dorothee Bar, State Minister for Digitalisation, Germany. In her speech, she lauded the excellent reception of the forum, the diversity of the participants, as well as the quality of the event sessions. Dorothee revealed the Germany government’s commitment to allocate €1 million to the UN IGF Trust over the next few years, as a gesture to strengthen the IGF towards an open and global Internet. Bar expressed her best wishes to Poland, the next host of the fifteenth IGF, in the year 2020.

The speech by Ms. Wanda Buk, Deputy Minister of Digital Affairs, Poland, centered around Internet fragmentation, freedom of speech, and Cybersecurity. Buk stated that Poland was the first country where citizens have a legal right to repeal on Facebook’s decision to block the content of users’ profiles. Wanda unveiled the main theme of IGF 2020: “Internet United: An Open, Free, and Undivided Internet.” She added that the meeting would be held in Katowise, a historical Polish city between two rivers, in a venue that has already hosted this year’s UN Climate Summit.

Giving this year’s IGF in numbers, Mr Liu Zhenmin, Under Secretary-General for the United Nations Department of Economic and Social Affairs, mentioned that there had been a total of 10 main sessions, 40 open forums, 64 multi-stakeholder workshops, 4 best practice forums, 18 dynamic coalition sessions, 7 national and regional initiative sessions, and 45 other side events. Zhenmin expressed his gratitude to all the participants (remote and onsite), the event funding partners and organizations, event volunteers, lastly, stating that he looked forward to the next IGF in 2020.

Disclaimer: The views expressed here are solely those gathered by the author(s) and should not necessarily be construed to be those of any of the organs or agencies nor any other organization (s) mentioned or discussed. This article is released under cc-by-sa 4.0 International license, and translation into other languages is encouraged. For more information, please contact the author(s) and or tzCNA.